Today and the Near Future

With the omnipresence of global computer networks, especially high-speed broadband and mobile communication technologies, people are able to publish their own work and to comment on mass media messages like never before.

Mass media made possible by digital information networks in the 21st century have taken on a many-to-many format, as users submit their own content and share what other mass media produce. There is a decentralisation of the process of deciding what people should be interested and the methodology of making meaning in society (i.e., telling many smaller stories that add up to a narrative shared by mass audiences) is now much more collaborative than it was in the 20th century. On social media platforms, media consumers can add their input and criticism, not only as audience members in the content we would like to see, read and hear, but also as actors who have an important role to play in society holding their elected officials accountable. Societies have democratized mass communication, but it is becoming more difficult to agree on a shared narrative or even a shared list of facts. Users create virtual bubbles where they mostly hear the voices and information that they want to hear. This has the potential risk of creating opposing worldviews with different sets of facts that create different images about what is actually happening in the world and how society should operate (Poepsel, 2018).

Some innovations pave the way for new modes of transport and new ways to communicate with users and optimise services. Furthermore, several European cities are living examples for the design, development, and testing of many of these new mobility solutions; from soft mobility to ride-hailing apps, from hard infrastructure for self-charging vehicles, to light rail or even aerial trams (UIA, 2021).

This said, how is technological innovation to be deployed and coordinated? Will cities actually switch people from their cars to their bicycles? New technologies will undoubtedly require new forms of policy process, new shared goals, new incentives, and new forms of stakeholder collaboration. This implies a radical change in behaviours and even mind-sets both among policy stakeholders and citizens. In urban mobility, both for policy development and for service provision per se, the new fuel is data. This new resource will be surely exploited to transform urban mobility.

People use different means of transport with different functions and different destinations and purposes. So, in order to communicate mobility effectively and efficiently, the elaboration of specific, diversified communication methods will be required. Today, this task demands the communication ability of a ‘brand’, i.e. a set of tangible and intangible values able to represent a distinctive identity and promise a unique experience. An accessible, clear, correctly built brand, with contents replenished and transmitted intelligently can help consumers to understand the benefits of sustainable transport, a ‘modal shift’ in mobility or the introduction of a regulation that changes the status quo (Zavatta, 2019).

The correct planning of the communication strategy for sustainable, aware mobility is a critical factor for achieving a quality result in economic and efficiency terms. But maybe more importantly, a political and ethical responsibility towards the new generations, the ones that will deal with the challenge of the future that we are already immersed in. Communicating consists of wondering ‘why’ about things and sharing clearly the ‘reasons why’ without forgetting that mobility is best expressed in our thought and in our ability to imagine (Zavatta, 2019). However, active communication can have positive impacts only in case of the provision of high-level services, therefore when relevant transport services have been developed before the launch of the communication campaign (Mobilissimus, 413).

The SEAT advertisement conveys the message that bicycles are for kids, cars for adults. (Image: SEAT Alhambra advertisement, 2016) 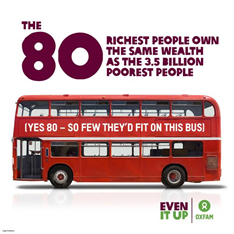 Transport inequality is strongly correlated to economic inequality, it is no coincidence that Oxfam used the image of a bus in its campaign before the 2014 World Economic Forum in Davos to denounce that the richest 80 people on the globe control as much wealth as the poorest half of the global population put together. (Image: OXFAM campaign, 2014) 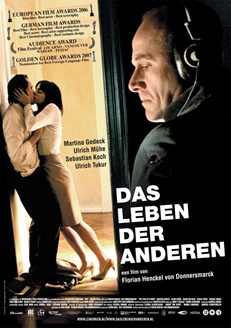 Movies such as “Das Leben der Anderen” (The Lives of Others) depict a world where technology and surveillance systems are all-pervasive. This raises some scepticism as whether the new generations will be aware of the importance of protecting one’s privacy or how to learn it. (Image: “Das Leben der Anderen” Original poster, 2006)

Hot topics to be considered in communication strategies

Although this situation is changing slowly, a male and stereo-typically technical perspective still dominates today’s mobility.

The electric car market is still small, partly because it is widely perceived as a luxury niche, and not just another means of transportation.

Freedom of movement is one of the fundamental principles of the Universal Declaration of Human Rights (UN, 1948) however…

The times in which the car stood as a status symbol in front of the front door are slowly but surely over (Kleebinder, 2018).

Innovation and technological advances are always at the core of marketing campaigns or communication actions associated with mobility.

One of the main concerns in mobility sharing applications is the exposure of personal data provided to the system.

Future influences in mobility are not only technological. A full range of elements participate in the ensemble of sustainable mobility

The information and telecommunication technologies (ICT) has transformed the mobility of passengers and freight and resulted in several economic and social impacts.
Read more