Skip to content
“Speed continues to be an important factor in transport policy and not something that will likely change.”

Leading transport economist, Alain Bonnafous, contributed to the 4th edition of Rebalance talks. In the first three talks, thinkers criticized certain aspects of the economic theory that leads to policy-making decisions, expressing concerns over the omission of social value, social justice and the subjective experience in the field of transportation policy claiming that a wider view must be considered.

To perhaps ‘rebalance,’ our talks, we leading transport economist, Alain Bonnafous spoke about Public Private Partnerships in the transportation sector and the difference in language and valuation between private business and public policy. He demonstrated how financial assessments are made, how policy models are created and how this may be improved upon in making transport decisions. He also stressed the importance of simulations in project proposals used for policy decisions. He spoke about the success of transport policy in Lyon, contemplated the relevance of speed and its influence on policy making, and discussed the influence COVID-19 has had on mobility.

In his discussion of Public-Private Partnerships (PPP), Bonnafous pointed out certain issues that need to be taken into consideration. He explained that at times, PPP’s can be difficult as a paradox exists whereby the financial internal rate of return (IRR) that the public entity requires is lower than that of the private company because the private company is expecting a higher IRR than the public sector generally does. He explained that, “the fundamental issue for PPP is the result of two opposite effects: on the one hand the effect of the higher efficiency of the private operator; on the other hand the effect of a lower Weighted Average Cost of Capital (WACC) for the public operator.” He went on to explain general differences between the language of private business and the public sector, Bonnafous stated that “the common point is the concept of present value; the difference is the content of the value. In a financial IRR they are only concerned with the financial values. In a socioeconomic IRR, the value can be financial or it can be external…gains or losses in terms of safety, pollution, etc.” This is an important point because the evaluation of a project is heavily dependent on the values that are considered. For example, in France, the value of the greenhouse gases is a high content value when evaluating different project proposals. For Bonnafous, now, thanks to methodological assessments based on socioeconomic net present values (NPV) are as powerful as multi-criteria methods. Finally, when speaking about the valuations of projects, he stressed the importance of “including a socioeconomic financial IRR/social net present value” and warned that we may risk having a loss of social value if a policy refuses evaluation.

There are three main ways that change happens in terms of mobility: in the location system (housing, buildings, urban sprawl), a change in social practices and relations, and/or a change in the transport system (the mobility of people and goods).

Bonnafous went on to speak about a successful project that he helped implement in the city of Lyon. He explained that in the 1990’s Lyon a double crisis was pending in terms of transport: a financing crisis and the loss of passengers. He explained that this crisis was due to urban sprawl, growth in household income, and car ownership. Modelled simulations showed that if certain measures were taken, this crisis could be avoided. For example, generalization of reserved lanes for buses, optimal supply (metro or tram) on heavy lines, on-street parking pricing and pricing of public transport correlated with the quality of service (i.e. relatively increasing). In this way Bonnafous pointed out the importance of modeled simulations and the importance of a mixture of self-financing systems that incur very little debt as time goes on, in part by employing the user-pay principle.

When asked, “To what extent should speed remain an important goal for transport systems?” Bonnafous replied by explaining that speed is a determining factor in relation to the functioning of the system. He stated, “if between city A and city B we go from a commercial speed of 130 km/h to a commercial speed of 300 km/h, this means that with the same fleet of trains and the same staff the system can to double the frequencies, that is to say to offer the user new possibilities to organize his activities.” He calls this the capacity for improvisation, which, for Bonnafous, is a more important social need today than the desire for slowness. The increase in frequencies, or an increase in inbound and outbound trains, adds to the ‘time available at destination,’ or TAD. In a recent study, the TAD was the main factor in choosing between the airplane and the TGV (France’s high-speed train). This is especially important for a round trip journey, especially one taken on the same day. Therefore, for Bonnafous, speed continues to be an important factor in transport policy and not something that will likely change.

Finally, when asked about the potential changes in mobility paradigms caused by the pandemic, Bonnafous explained there are three main ways that change happens in terms of mobility. He explained that a shift occurs when there is a change in one or more of the following systems: in the location system (housing, buildings), a change in social practices and relations, and/or a change in the transport system (the mobility of people and goods). Bonnafous noted that within the location system, the most notable change that has been occurring in general, is that of urban sprawl. Throughout the pandemic, Bonnafous noted that a change has occurred within the social system – the development of teleworking and teleconferences as well as the development of teleshopping. Within the, teleworking, Bonnafous noted that generally, the home-work relationship represents a third of daily trips. He explained that, “according to the first studies related to COVID, teleworking could ridicule these trips by a quarter or less than 10% of daily trips. Teleshopping can reduce travel related to the purchase motive, but access to commercial information is increased and may induce travel.” As the pandemic continues we will see more and more if these changes within the social system will persist or if our mobility patterns will return to that of pre-pandemic times.

“We need to move beyond thinking of mobility as strictly transportation”

“We need to re-evaluate what we consider universal”

“We have to stop expanding our big cities” 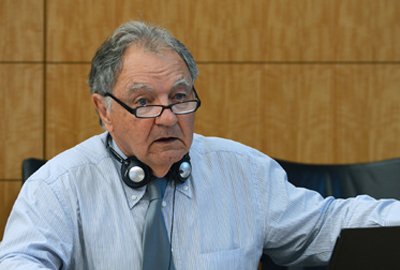 Alain Bonnafous is Emeritus Professor of the University of Lyon, leading researches and several research programs in LAET (Laboratoire Aménagement Economie Transports), the research institute of which he has been the first Director from 1975 to 1992. Expert-consultant of European Conférence of Minister of Transport then International Transport Forum (from 1971), OECD (from 1971), World Bank (from 1986, consultant roster n° LB537) and European Commission (from 1990, expert n° E44590 S). Member of the Board of Directors of Fondation Maison des Sciences de l’Homme de Paris (1996-2007) and Réseau Ferré de France, national company of the French rail network (1997-2007).

Watch the full interview below